The Gamification of Novel Writing

Question 1: What is your current word count? (on Day 15)
The results varied. At this point, my students should have been at about 25,000 words. (I wasn’t quite there myself, alas.) Three students hadn’t broken 20,000 yet. One student was already at 58,000 and was sprinting toward 70,000 words. Seven students were at 25,000 or above. Six students hadn't reached the half-way milestone yet.

For twenty years, my writing practice had no structure. I wrote when inspired and I would keep writing until I wasn’t inspired. If I didn’t have a big block of time, I wouldn’t write. I waited until I did have a big block of time—which happened…oh…never.
I was 25 years old, two years into an MFA program, and I still acted (without really realizing it) as if writing was something I did “for school.” And then one fall, the buzz among all students in my program was that Inman Majors had returned from summer break with a 200-page manuscript, a rough draft of a novel. Of course, we all hated him immediately.
I ran into him at a back-to-school party, and I asked him how he did it. He took a swig of beer and spoke the words I have been quoting ever since: “Well, I’ll tell you, Cathy. Every day, I’d write two pages. And then I’d play golf.” [Inman has since informed me that he was playing BASKETBALL that summer, not golf. My apologies.] I felt like Moses at the Burning Bush, hearing the voice of God. Really? It was that simple? Well, of course it’s that simple.
It only occurs to me now (because I am incredibly slow sometimes) that Inman turned lots of things into games. It's in his blood, so to speak. He liked to make things interesting. He was the guy who always organized the NCAA Bracket Pool (before the internet started doing it for us). He liked to place a bet or two, as I remember.
You can’t just sit down and draft a book. You can’t just sit down and write 50,000 words. A marathon is run mile by mile. A football game is played one down at a time. Like Anne Lamott says, you have to take it bird by bird. NaNoWriMo forces students to turn an abstract big thing into a series of small concrete things. Words. Pages. Accumulating incrementally over time.
Like gold stars. 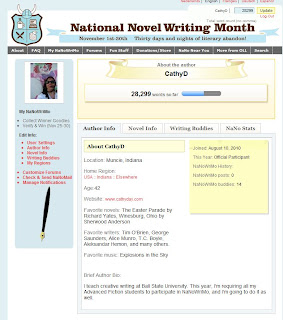 This is why NaNoWriMo is so popular with Generation Y: because it turns writing a novel into a game. A huge, dynamic multi-player game in which you accumulate words and pages instead of points.


Here’s an interesting article from The Chronicle on the trend of  “Gamifying Homework.”

Here's an interesting talk (30 minutes long) by Carnegie Mellon professor Jesse Schell on the Gamification of...well...Everything.
Are you appalled by what I'm suggesting? Are you thinking, "But Cathy, novel writing isn’t a game! How dare you suggest such a crazy ass thing!"
But anyone who has written a novel knows that, indeed, it is a game—one you play against yourself, mostly. The only way to win is to get a first draft, and you do it bird by bird, page by page, racking up words until you hit 50,000.


[Here, my video game metaphor breaks down a bit because I know nothing about them. Sal Pane, where are you?]


For a very long time, what separated "real writers" from "wanna-be writers" was that real writers figured out some way to get the writing done. More than likely, this involved creating some kind of internal rewards system or "gamification" to tap into the motivational part of their brains. And then they crafted, yes, and they used their talents and intellects, yes, but first, they had to write a freaking draft.


Now we have have lots and lots of external rewards systems. Like NaNoWriMo. Like 750words, whose creator, Buster Benson, is a big believer in "gamification." And--oh my god--what are creative writing classes and programs but another form of external rewards?


You either find this up-ticking counter frightening, or you find it thrilling.